Election Day minus 4 and 3 - Time for NOTA 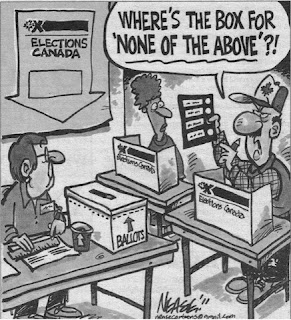 Day 34 & 35: The cartoon says it all. It was published in the local Markham Economist & Sun on April 28th. While I keep ranting that there is no real choice between the parties, the polls don't agree. Apparently many Canadians believe (are under the illusion that) that they have a choice. Instead of the statist Conservatives or Liberals they are clambering for the even more statist New Democratic Party (NDP). Some choice!
Of course the NDP has nudged the rudder that steers this country for decades now, why not make it official and give them the helm and the captaincy? The good ship Canada will survive, but the pain that will result may also last for decades, and we may be cured of this disease that is socialism, or not. I shake my head when I hear explanations for rising health costs, education costs, any cost that government has accepted as its responsibility. All these problems can be "fixed" by creating yet more government  programs, more government spending etc. etc. ad nauseum.
Today I had the opportunity to speak to students at a local secondary school near my home, as part of an all-candidates debate in the waning days of this campaign. I think I made an impact, I felt I was on "home-turf" speaking to students - Grade 12's, 11's and 10's. A few spoke to me later, commenting on how they had never heard of Libertarians before, found some of my ideas interesting and worthy of examining, and of course that was the whole point.   So chalk one up for me, a small (no pun) voice in a very big country. Will it make a difference? Who knows, but we will find out soon. I mentioned to the group that I will be back for the October Provincial election, so I planted a seed, and our message then will be very similar to our message now. Maybe, some day, we could be more than "none of the above."
Posted by Allen Small at 4:16 PM