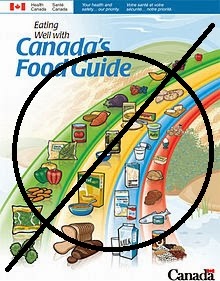 This is the time of year we promise to change our bad habits. Canadians think they eat poorly when compared to the official government food guide. No one would ever suspect that the food guide may be erroneous. But what if it were?

I've written about this before, most recently here. Since then more evidence has accumulated and more books have addressed the issue. One of the more outspoken writers, a neurologist, David Perlmutter, suggests that both the Canadian and American food guides are upside-down. Rather than whole grains and carbohydrates being the largest component of a good diet, he suggests they be severely reduced or even eliminated from most people's diets. He points to gluten, a protein in many grains as the culprit. Interestingly, food marketers have already ratcheted up the production, distribution and sale of "gluten-free" products in North America. It's the latest fad. Deservedly or not, gluten has become what fat was from the 1970's to the present day, something to be avoided. Perlmutter and others also suggest that the demonizing of fats, and fat-like substances like cholesterol, has been all wrong.

Articles like this one from a reputable magazine, makes the decades long government sanctioned directive against fats sound like evil propaganda. But there is plenty of evidence to support the benefits of fats. That has not stopped the Ontario Liberals in cahoots with the Ontario Medical Association from regulating school cafeteria lunches and even suggesting food warnings on so-called "junk-food."

Climate crapshoot - an Arctic free of ice? Not so fast.

I have written many posts that comment on global warming/climate change. In fact, next to politics, my climate comments are likely the most numerous.

That's no accident, I've always thought that the whole climate issue has become a secular religion, a subset of the environmental movement which also has all the character traits of a religion. I hope I don't need to elaborate on the dangers implicit in religious belief. Any decision or conclusion grounded on faith should not be acted on and certainly no one should be forced to act on faith. Unfortunately in the case of human caused global warming, acting on faith and forcing others has already happened.

This week is the fifth anniversary of one of Al Gore's famous predictions. Five years ago Gore predicted that by 2013, for a few months in the summer, the Arctic oceans will be ice free.

Well, it hasn't happened, not yet anyway. I'm not going to rule out that it won't happen in the future. I believe the data that suggests the volume of Arctic ice has decreased. That seems to me reasonable as an extension of the warming that has been occurring since the end of the last ice age roughly 10,000 years ago. I've always believed that climate changes, and I even believe that humans have been contributing to that change. To believe that humans are the sole or even a major contributor to climate change for me is still a huge stretch. The cliched phrase of "97% consensus of scientists" believe we are the cause, is also a huge stretch.

Science doesn't work by consensus. Galileo was right on the heliocentric model, everyone else was wrong. Darwin was right on natural selection, acts of creation and intelligent design are wrong. Both proposed ideas that were contrarian. Global warming/climate change models don't jive with reality (see chart), and therefore as explanatory theories they seem to be wrong too. The skeptics may prove right. The variables on climate are too numerous and probably not all known, thats why in the chart above the observations diverge from all the models. The error will be magnified with time.

But back to Mr. Gore's prediction. The urgency of his predictions, coincident with hot summers, mild winters, Hurricane Katrina - all that, plus the religious zealotry of environmentalism, gave him undeserved credibility. He still has it. Some governments, Ontario's Liberal government to name one, could not wait to act, so urgent was the belief that something must be done. As a result, Ontario has closed (most, almost all) its coal burning generation facilities and eschewed any fossil fuel alternative (even clean natural gas) for wind and solar power. Burning natural gas of course, still produces the evil CO2. Our electrical grid is in a mess with continually rising prices and a legacy that will take generations to fix, if ever. Meanwhile, real damage caused by humans forcing global warming or climate change may not happen for decades or centuries or ever.
Posted by Allen Small at 6:54 PM 1 comment: