Want proof that the G20 meeting was money well wasted?
Harper got the G20 members to sign off on cutting their deficits 50% by 2013. So slow their rate of borrowing to half in three years. Neil Reynolds thinks they are operating under a delusion here.
Posted by Allen Small at 2:22 PM No comments: Links to this post

Return of the Maunder Minimum?

Last January 11 I posted an article called "Can scientists be AGW Skeptics" where I showed a satellite photo of the UK covered in snow top to bottom. It was a very cold winter over there and in much of Europe.
This week Neil Reynolds writes an interesting little piece about the "little ice age" of the late 17th Century which held the British Isles and  a good chunk of the continent in its icy grip. This was a real event for which historical writings exist, along with historical corroborating weather data from the UK which tracks back 350 years.
The little ice age corresponded with a solar anomaly called the Maunder Minimum which was an extended period of low sunspot activity. Sunspots (cooler areas on the sun) vary in cycles of about 11 years (give or take) and our sun is currently at a low in sunspot activity. All this of course suggests to me that the sun varies in its energy output over time which should have profound effects on Earth's climate and maybe a more satisfactory theory explaining climate change. There is good evidence that the sun is a variable star and that its energy production seems to follow cycles both long and short. If that theory explains climate change (even partially), than it is unlikely to gain support from the scientists of the IPCC because there will be no funding for their terrestrial research into anthropogenic causes of climate change; so solar variability is ignored or played down. Who can blame them?
Reynolds' article suggests that Britain and Europe may experience another prolonged cold spell and of course the University of Reading physicist who makes this prediction says it has no relation to the ongoing global warming which is caused by humans. Of course it doesn't. Or maybe global warming is caused by one of the longish solar cycles, who knows?

Posted by Allen Small at 12:22 PM No comments: Links to this post

Running out of other people's money

Summer seems to make it difficult to get concerned about anything. All those important causes whether personal or work related will wait for September. That's always been my attitude anyway and it seems to be true of the stock market and everything else as well. The media often sets the tone for what should be at the top of our collective agendas. Right now the World Cup is the big story here, but close behind is the impending G8/G20 traffic disruptions and security costs in the Greater Toronto area. Close behind that is the catastrophe in the Gulf of Mexico, but all of it does not seem that important because its summer.
Everyone has forgotten the economic crisis of 2008/09 that created market turmoil, job losses, portfolio losses and on and on. Most people think the problem has been solved, the bailouts worked, good times are just around the corner, the governments of the world have things under control. The coming G8/20 meetings will be the icing on the cake and will demonstrate to the world that everything will be hunky-dory. Some people think that this apparent pause the economic crisis is just the calm before the real storm.
Johan Norberg is a Senior Fellow at CATO and he sounds like that TV ad Canadians are accustomed to viewing from the ING guy "Fredrick" who cautions people to "save your money". Norberg has some sobering comments in this CATO video from last month:
http://www.youtube.com/watch?v=0WEwy-uGKoI&NR=1

Posted by Allen Small at 12:36 PM No comments: Links to this post

Obama is ready to kick BP in the ass

ReasonTV thinks Obama should be kicking himself first. The BP oil disaster is another clear example of how corporations can be vilified for their blunders. This is a shared blunder, it's not just BP.  The US Federal government is up to it's elbows in sticky brown goo because it is their fault almost as much as it is BP's. Watch this:
http://www.youtube.com/watch?v=Quk0tb2qUwY

Posted by Allen Small at 6:29 PM No comments: Links to this post

Here is a nice piece of research done by Dan Mitchell at CATO: "There Are too many Bureaucrats and They are Paid too Much". Of course this refers to the American situation but we in Canada should not feel smug. I don't need to add anything except that the same goes for Canada's Federal, Provincial, Regional, and Municipal bureaucracies.
http://www.youtube.com/watch?v=5xzd3puYmiM

Posted by Allen Small at 8:18 AM No comments: Links to this post

Who is Ayn Rand? by Charles Murray 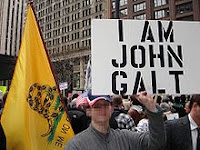 A daily email from CATO@LIBERTY (you should subscribe) prompted this posting. It comments on the fact that two biographies have recently appeared describing the life and times of Ayn Rand. Apparently neither of them were particularly complementary (I have not read either) to Rand and I was aware of that.
Rand is reviled in most academic and philosophical circles possibly because her philosophy of Objectivism seems so simple (it's not really) and compelling. Her books have sold very well in the past 50 years and are selling even better these days possibly due to the economic crisis around the world (I'll wager they sell better than any other philosopher).
Some would say the books, especially Atlas Shrugged, are even prophetic. I don't think there is any prophesy involved, I think what is happening (and will continue to happen) around the world is a logical consequence of many bad decisions by many people in power over many years. If economics is a science (which I think it is) then certain actions will lead to undesirable  and unintended consequences, much the same as crashing a car into a concrete wall will cause damage and worse.
Anyway, Charles Murray wrote an interesting piece "Who is Ayn Rand", where he talks about Rand and the new bios and I'm thinking its time to reread some of her stuff. Despite her negative portrayal by modern-day academics, her popularity runs circles around any other of her kind, and she remains a positive and important influence on me and millions of others.
Posted by Allen Small at 6:01 PM No comments: Links to this post