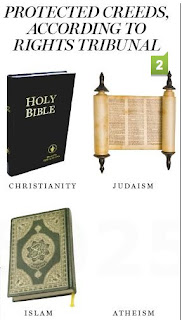 Here is an example of how unnecessary government interventions create unintended consequences.  According to this newspaper report, atheism is a creed that requires protections much the same as other religions do. So, atheism is equated to religion. In the actual paper copy, on the front page (see photo), the National Post makes light of this. I guess to pander to their social conservative patrons.

I'll skip over whether religions need protection, I don't think they do. I'd like to examine atheism as a creed.

According to Dictionary.com "creed" is defined as:

1. any system, doctrine, or formula of religious belief, as of a denomination.
2. any system or codification of belief or of opinion.
3. an authoritative, formulated statement of the chief articles of Christian belief, as the Apostles' Creed, the Nicene Creed, or the Athanasian Creed.

As far as I know, to be an atheist one is not required to join a group that has an atheist code or formula. Atheists typically don't meet regularly to fulfil belief obligations. They don't construct massive buildings as places of worship, nor do they get tax breaks from local governments for doing so. Calling atheism a belief system is a huge stretch and distortion. If I don't believe in fairies, is that a belief system? Hardly!

The news story above, reports on a decision by the Human Rights Tribunal of Ontario (HRTO), a superfluous arm of government if ever there was (theoretically in Canada, Charter Rights are already protected). It seems a Mr. Choinard of Grimsby Ontario, wanted to match the Gideon's of bible distribution fame as a protest. He wanted to hand out an atheist text “Just Pretend: A Freethought Book for Children,” and of course was, as expected, refused. He made a case to the HRTO alleging that the District School Board of Niagara has “discriminated against them … because of creed.” Making such a protest is simple and costs nothing to the complainant, there is no barrier to frivolity, not that I think this is a frivolous complaint.

As a result, earlier in August, the HRTO ruled on the complaint saying that the school board's policy was biased.
“The policy was discriminatory because its definition of acceptable materials violated substantive equality by excluding the kinds of materials central to many creeds.”
The school board policy blocked atheist books and other “emerging or non-traditional creeds.”

Throughout the process Mr. Choinard maintained his primary goal was to critique the board's policy and point out that government public schools should not be in the business of supporting a religious agenda. I absolutely agree, and that illustrates the real problem. If parents had the (affordable) option to send their children to their school of choice, religious or not, this entire case would not exist.

Ideally schools should be an extension of the home. The values that parents want to instil in their children should be a parental responsibility. Busy parents should be able to obtain a service, at an affordable price, that fulfils this need consistent with their values in addition to educating their children for the modern world. To have government public schools try to be all things to all people is impossible and undesirable; and to require an HRTO to enforce this is ridiculous. Here are two arms of the Ontario government that can easily be reduced or eliminated.
Posted by Allen Small at 4:06 PM 2 comments: 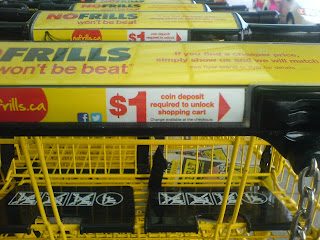 Out doing a bit of food shopping this afternoon. I spent the first few minutes trying to liberate a shopping cart with my quarter. That comes from habit, the cart thingy would not budge, then I read the instructions (see photo).
I did not get the memo that things had changed at my local food store.

1. A quarter seems no longer worth as much as it was. I've noticed this on previous shopping trips. People don't return their carts to the right spot sometimes because their time is worth more than a quarter, OR it's raining, and again, not worth it.

2. The "Cart return islands" in the parking lot had disappeared, now shoppers have to march the cart all the way back to the store. That means that the entry level job of moving carts back to the store is gone. Casualty of the minimum wage? Maybe.
How long will it be before it takes a "two-ny" ($2) to liberate the carts?

Posted by Allen Small at 5:41 PM No comments: 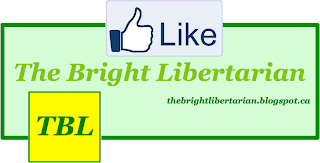 This week I created a Facebook page to highlight this blog TBL, soon to be in its fifth year.

The Facebook page ought to allow more discussion and feedback, and I can post smaller items that do not warrant a full blog post but are still very interesting.

You can find the TBL page here.

If you don't use Facebook, but have libertarian leanings, why not air them out in the classic libertarian way, the dreaded online argument thread. Join up. Arguing on Facebook is not quite as interactive (or funny) as the video below, but fun nevertheless.

Posted by Allen Small at 7:27 PM No comments:

By now the story of the big rainstorm that caused flooding and power outages in the western part of Toronto, earlier this summer (July 8, 2013) is old news. Certainly the severity of the storm was unusual, and with that much rain, flooding was to be expected. But most of the flooding was cleared by the following morning leaving behind considerable damage to property.

What was unexpected was that electrical power remained offline to thousands of homes and businesses for nearly two days which added (unnecessarily) to the destruction of property in freezers and refrigerators across the region. The Mayor of Toronto even appealed to citizens to conserve electricity because the city was “hanging by a thread.” Was this a surprise to authorities, an unnoticed flaw in the system? Who is in charge?

The Ontario Power Authority (OPA) is in charge of Ontario’s electricity infrastructure, and the disruption in service after the recent flood was foreseen years ago.

A report issued in October 2007, recommended “the siting of new gas generation in the southwest part of the Greater Toronto Area (Southwest GTA)” and that OPA intended to “procure such generation by 2013…to address capacity needs…expected by 2015 in the western half of the GTA.” Of course the proposed Oakville and Mississauga gas power plants that were supposed to mitigate the problem were canceled for political reasons.

The same report foreshadowed the recent power failure: “Extraordinary events or major failures on the transmission system could lead to inadequate supply capacity or voltage stability issues. The risk of such events is significantly reduced with internal generation capacity. As an example, New York City requires an installed generation capacity that is 80% of the city load.” How does Toronto, the financial capital of Canada, compare? Only about 10% of its electricity is generated locally. The city is on tenterhooks.

The best available guess is that the cancellation of the two aforementioned gas power plants cost about $600 million. The recent economic ($850 million) and societal losses during the power failure should to be added to that estimate. Indeed, the cancellation of those plants was not the decision of experts, and not done in the interests of the people of the Southwest GTA. It was a calculated decision designed to save two political seats weighed against the best interests of hundreds of thousands of hard working citizens.

In a recent committee hearing on the gas plant debacle, Dalton McGuinty reiterated his position that the power plant cancellation was “the right thing to do.” Yes, it was for the Liberal Party, but what about the ratepayers and citizens of western Toronto, and the rest of the province?

This is the Libertarian platform plank on electrical energy generation.
Posted by Allen Small at 12:04 PM No comments:

Most people think that the government sells all alcoholic beverages in Ontario. That's not exactly true.

The Beer Store (TBS) is a government sanctioned cartel (they call it a consortium) of three private companies (two of which are 98% owners of TBS). TBS is controlled under Ontario's Liquor Control Board Act which gives the LCBO the power to set price floors, set how much beer may be discounted during a "sale," and just about everything else to do with sales and distribution. TBS's employees are all members of United Food and Commercial Workers International Union.

Recently OCSA (Ontario Convenience Stores Association) paid for a study that showed "that the average price difference in a 24-bottle case of beer between (Ontario and Quebec) is about $9.50, or 27 per cent lower in Quebec.  This was blamed on the Ontario cartel, and the study implied that allowing convenience stores to sell beer would lower the Ontario price by creating "efficiencies." What a good idea I thought, at least a start to move away from government imposed monopoly. So I called up a spokesperson for  OCSA to see if they would be interested in providing a speaker and supporting a conference that I'm organizing. I told him the conference was apolitical but would have many libertarians that will support his cause. "No, not interested," and he went on to explain how liquor and beer sales are important income to the provincial treasury, about $1.7 billion in 2012. Right. It was a short phone call.

So what is OCSA trying to accomplish? They have a campaign on Facebook, and here, which purports to argue "Free Our Beer." They're plying the idea that most people want convenience and a bit of a lower cost, which is certainly true. As for competition, they don't really want to "free our beer" they want to get in on the action and become part of the cartel.
Posted by Allen Small at 6:08 PM No comments: