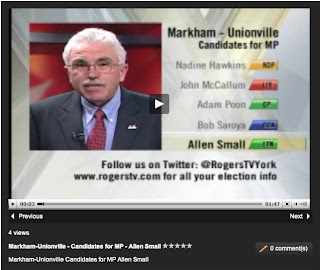 Day 23, 24, 25: Its has been busy. On Sunday the Ontario Libertarian Party held a Caucus Meeting that had been planned some time ago. With an election set for Oct. 6, 2011, we are preparing to have many more candidates and a real presence, so maybe the media will give us some credit. Our keynote speaker was Gerry Nicholls, "One of the top five political minds in Canada," and he has libertarian leanings. It was well worth going, unfortunately I missed an all-candidates meeting for the current election. Too many elections!

The interview on the Edge FM102 was on Monday morning. I had been warned that I might be in for a rough ride, and after listening to that station I was prepared. Here is the link to the particular show (Dean Blundell Show), then look for the podcast for April 18th, 2011, next let it load onto your computer. You can PAUSE the playback while it loads, my interview is at the 42 minute mark (after it loads). You should find it funny, certainly entertaining, and ultimately serious. Enjoy, it's 8 minutes long.

Last week I was invited to speak for two minutes by my local cable channel RogersTV. That picture (left) is from that talk, and here is the link with a brief commercial at the beginning. If you listen to each of the other candidates you will see why Markham-Unionville is as safe a  Liberal seat as there is in the entire country. My wife thinks my talk was the best (and she is of course, unbiased ;-) ). I think it is the most coherent, but you decide.

Today I met all the candidates for the first time in a debate of sorts at the same place I did that two minute talk. I was one of five candidates and I was totally ignored in any of the comments made by them, as expected, even though I was possibly harsh in my criticism of their parties. I know I must have made an impact though, because after the taping session one of the studio employees told me that I had "won" on passion. Too bad passion does not register on election night.
If you live in York Region my debate will air on Friday April 22 at 8:00 pm in all areas, and Tuesday April 26 at 1:00 pm in York South and April 27 at 3:00 pm in York North. Check this for exact times.
By-the-way, I still have not had time to repair my blown-over signs. I've done the odd one, when I'm in the neighbourhood of one, but, I have had family gathering these last couple of nights and that has priority, the signs will wait.