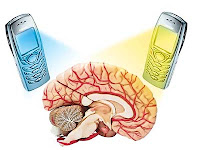 More worries. An announcement from the WHO recently about risks from Radio Frequencies (RF) associated with mobile phones was all over the news.
Remember the WHO, they are the group that announced the 2009 H1N1 Pandemic, that caused no end of consternation among world governments, but proved to be a tempest in a teapot. So what are we to make of this?
Its well known that ionizing radiation can result in molecular interactions at the level of living cells and tissues. X-rays and Gamma radiation are the most common form of ionizing radiation we humans are exposed to. X-rays are generally considered "man-made," gamma rays are naturally occurring, and for most people these two would be considered identical in their effects depending on dose: exposure time.
But radio frequency (RF) radiation is non-ionizing, ie. it does not mess with molecules by breaking chemical bonds when electrons are moved around. RF is a bit like visible light, shine intense light or RF on something long enough and that light or RF will be absorbed by the something and converted to heat, another form of non-ionizing radiation. It might help to have a look at the electromagnetic spectrum to see how all these radiations are related. Or not, this is starting to sound like a physics class.
Here is what the WHO announcement said with regard to my last paragraph:
"Tissue heating is the principal mechanism of interaction between radiofrequency energy and the human body. At the frequencies used by mobile phones, most of the energy is absorbed by the skin and other superficial tissues, resulting in negligible temperature rise in the brain or any other organs of the body."
"A number of studies have investigated the effects of radiofrequency fields on brain electrical activity, cognitive function, sleep, heart rate and blood pressure in volunteers. To date, research does not suggest any consistent evidence of adverse health effects from exposure to radiofrequency fields at levels below those that cause tissue heating. Further, research has not been able to provide support for a causal relationship between exposure to electromagnetic fields and self-reported symptoms, or “electromagnetic hypersensitivity”."
Is this anything to be concerned about given those comments? There is no discussion about possible mechanisms, or comparisons with other heat producing devises. What if a heating pad is held to the head for an extended period of time? Does it present a risk? Is heat the problem or is there something special about RF? What about cordless phones so common in many homes? What about microwave radiation from leaky ovens in homes? What about the fact that we in the industrialized world, are bathed in an ocean of RF and microwave radiation almost all the time?
The online version of Reason Magazine has an article that addresses this very issue, and gives it much needed perspective. For me the entire issue sounds like a way for scientists to scare up some money from various governmental organizations, for further study to no one's benefit, quite the contrary in fact. Then there is the line I heard the other day on radio, if this were true about cell phones, entertainment and sports agents would be dropping like flies.
Posted by Allen Small at 12:44 PM