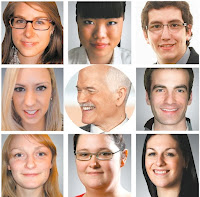 Every experience is a learning experience. This was the first election (out of two) that I had election signs. What I learned three weeks ago is that sign stakes need to be pounded deeply into the ground or you will be chasing and repairing signs for the whole campaign. Yesterday, with my wife helping, I learned that pulling out those stakes is back breaking work. Fortunately we have had a very cool wet spring, the ground was soft, so I managed to get most of the stakes out and I lost about 40% of the signs for a variety of reasons. I think I had mentioned that electioneering is hard work.
I also learned that neither effort, ability nor experience will necessarily get one elected. You might think otherwise.
See the picture over there? These young people are all part of the "orange crush," the surge of NDP candidates elected in Quebec, approved and led by the guy in the middle of that montage, Jack Layton. Layton seems to be looking at Ruth Ellen Brosseau, previously an assistant manager at Oliver’s Pub on the Carleton University campus in Ottawa. Ms. Brosseau, who speaks French poorly, was elected in a largely Francophone riding 300 km away from where she lives. She spent part of the election campaign vacationing in Las Vegas, and now there are irregularity questions around her nomination papers, particularly the 100 signatures required to be nominated.
In the top right hand corner of the montage picture is Pierre-Luc Dusseault, just completed one year of university, almost 20 years old, and now the youngest person elected to Parliament in Canadian history.
Then there is Mathieu Ravignat not in the montage, but he previously ran (1997) as a candidate for the Communist Party in Quebec, illustrating for all what the NDP really stands for.
Now I'm sure these people are passionate about NDP beliefs, but what were Quebec voters thinking when they cast their ballots for them? These young people will be receiving a $157,000+ annual salary, plus other perks and will represent voters for the next four years at least. They will be running the country in some small way. What kind of understanding do they have about...well, anything? I would not even have voted for myself when I was 20 years old. I had no sense of community, or family, or a real work ethic (outside of school), or much of anything. Sure I had ideas, values, morals, but little practice. These young people have skipped the apprentice stage, and have gone straight to prime time. Their victories underline the stupidity of large parts of the electorate. Most politicians say they yield to the wisdom of the electorate, what wisdom was displayed here?
I will have more to say.
Posted by Allen Small at 12:41 PM