Where are the Atlantic Hurricanes of 2013? 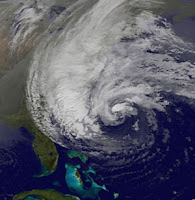 Not that I miss large destructive storms but, there has not been one named Hurricane in the 2013 season as yet. We're half way through the six month June 1 to November 30 Atlantic Hurricane season, a season that was predicted to be "extremely active" last spring. There were lots of warnings in media, but so far nada.

Now its too early to start criticizing the computer models that were used to make this prediction, but things look fairly quiet through to the middle of September. In fact 2013 could produce a record for the latest named storm in the short history of hurricane prediction. That is, assuming a storm happens. Wouldn't it be something if NOAA's prediction was wrong? I guess climate science models need some revisions?
Posted by Allen Small at 7:27 PM