The necessaries of political sainthood 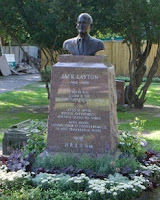 This past week was the first anniversary of the death of Jack Layton. He died in office as Leader of the Opposition, less than four months after taking his party to a once unimaginable second place finish in a Canadian Federal election. That is an accomplishment worthy of praise if your political bent is toward socialism. So, Mr. Layton and I have very little in common as I suggested here just days after his death.

Certainly I respected him as a politician, but I thought the funeral then, and the memorial just days ago, were a bit over-the-top. I know its inappropriate to speak ill of the dead, but Jack Layton did not plan the funeral or the recent memorial, these were planned by his living family and his political party. Most commentators in the Canadian media avoided any criticism of the recent memorial, I found a couple I could agreed with. Chris Selley in the National Post, said this about Layton and the memorial:

"He wasn’t a hero, wasn’t a saint. He was an uncommonly skilled retail politician who gained respect for practicing a brand of politics that was less greasy and vulgar and off putting than his opponents’. That’s not nothing. It’s quite a lot, really. I don’t begrudge anyone a good vigil. But ringing bells in towers for a nice guy and a very good politician just seems a bit … much."


Some of the media went to great lengths to pay tribute to Layton, in particular the government funded broadcaster CBC. It went a bit overboard in its coverage in my opinion. That did not help dissuade my belief that CBC has an overt leftish bias, for which I continue to resent paying for in any amount.

Also annoying was the frequently heard "Jack would have wanted it this way" from a variety of interviewees and commentators. Of course he would! This was blatant political opportunism, by a political family with a message to deliver no matter how inappropriate it was on the back of a memorial.  It was nothing less than a political beatification, not unlike was done with Tommy Douglas or Pierre Trudeau or FDR in the States. The difference being those men had made some accomplishments (for good or ill), what exactly did Jack Layton do outside of his tiny political world?

Some at the memorial promised to "finish the work that he started," and some suggested Layton was a beacon of hope. Well, hope is a subjective thing, and the hopes of Layton and the NDP are most emphatically not shared by me. Yes, I'm sure he wanted to make Canada better. So do I. But my vision of the future of this country is diametrically opposed to his.
Here is a excerpt from the Preamble of the  2011 NDP Constitution to show you what I mean: 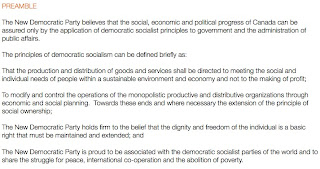 Did you read that? Let me highlight these lines again:

"That the production and distribution of goods and services shall be directed to meeting the social and individual needs of people within a sustainable environment and economy and not for making profit;

To modify and control the operations of the monopolistic productive and distributive organizations through economic and social planning. Toward these ends and where necessary the extension of the principle of social ownership;"

Is this the work 'they' want to finish? Is this the beacon of hope and optimism that we are to look toward? Is that what it takes to become a political saint in this country? Do those words represent Canada? Not my Canada!

I occasionally agree with Ezra Levant, often not. But here is one place I think he said it best for me: