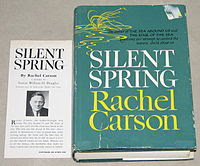 National Post editors will never be accused of being shrinking-violets. The fiftieth anniversary of Rachel Carson's Silent Spring is upon us and the Post pulled no punches marking the occasion in an editorial this week. Wikipedia calls it the book that helped launch the environmental movement.

The Post points out that Carson was correct in that the indiscriminate use of synthetic chemical pesticides is not wise: "spraying large quantities of pesticides can have serious, and sometimes fatal, consequences. Ms. Carson helped sow a degree of caution about synthetic chemicals by showing the ill effects they can have on plant life, animals (Silent Spring focuses on the effects of DDT on birds — the Spring season will be “silent” once they have all been killed off) and, potentially, humans."

But, and it's a big BUT, the editorial continues: "DDT is not nearly as harmful to humans (or birds), in moderate doses, as Ms. Carson suggested. But it is harmful to the mosquitos that transmit deadly malaria and typhus that kill millions every year across the developing world." That's the issue of course, the uses of pesticides and other methods to increase crop yield or protect humans are rarely black or white situations, there are levels of appropriate use.

Its thought that the total ban or at least diminished use of DDT, particularly in areas where serious diseases (malaria) are carried by insects has led to untold millions of human deaths. How many deaths can be shown to be caused by DDT spraying? Certainly not anywhere near the deaths attributed to malaria. What I'm suggesting is that there is a level of DDT use that allows it to be used effectively without undue risk to human health, and therefore it should be used in that context.

The ban and abandonment of DDT is for me a perfect example of the "lets be safe attitude" that many environmentalists have with regard to global warming and similar situations. You know the attitude, where they come out and say lets curtail energy output, lets cut back on industrial production, lets stop using fossil fuels to drive our economy, just in case it may cause catastrophic global warming, melting of the ice caps, raising sea levels - in fact the whole Al Gore "inconvenient truth" scenario that only the most fanatical still believe. That attitude has the effect of destroying or diminishing our economy on the chance that global warming or whatever will lead to catastrophe.

The Post's editorial mentions the use of chemical spraying in Dallas Texas to curtail the spread of West Nile virus. The irony there is that West Nile's North American invasion is likely an effect of global warming, but the spraying went ahead without much fuss.

My point being, that environmental issues are best examined where they actually affect people, and that is in local situations where those involved can make use of all the tools that are available to them and make rational and objective choices.
Posted by Allen Small at 3:11 PM