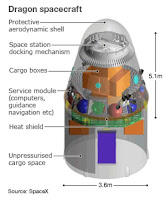 I've always been a "space junky" - outer space that is. I can vividly remember that day in October 1957 when Sputnik 1 was launched by the Soviets (yes I'm old - check out one of my favourite movies October Sky). Back then, and for some time afterward, I was brainwashed into thinking that only governments could "afford" to explore space. Space was to be explored by countries; and of course this was troubling to me because by the time I hit my late teens I was thinking that governments maybe should not be doing this with taxpayers money. In those pre-libertarian times, I had some problems rationalizing my love for space exploration and my political philosophy. I've written about this before, but today I'm pleased to say I feel better about the whole thing now, thanks to Elon Musk the CEO of SpaceX Corp.
SpaceX, a private corporation, announced this morning (Dec. 8, 2010) that they have launched the first large capsule into earth orbit, the Dragon spacecraft. Now Richard Branson's Virgin Galactic could have competition for tourists! Marvellous!
Posted by Allen Small at 1:37 PM