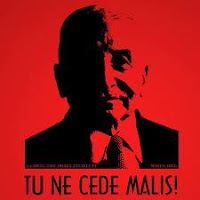 Flipping through the newspaper this morning, as I do most mornings, its difficult to avoid headlines that remind me of ineffective and inefficient government spending programs. So today I read that "Canadians (are) waiting longer for surgery" or that "Canada (is) slipping in math, science and reading skills". A quick glance at the articles and I'm not surprised to read that things are a little worse than last year. I'll bet things will be a little worse next year, in fact I'll bet that prior to the next federal or provincial election the ruling party will promise to fix these problem areas by spending more money on them. I will also bet that is exactly what they promised prior to the last election. But my friends I don't think governments can fix anything, and today I have a specific case in point as illustrated by a guest writer.
Rod Rojas holds a Canadian Securities Course designation, is a member of the Ontario Libertarian Party, and has written articles for mises.org. Here is his take on how government deals with the perennial issue of homelessness.


During the recent mayoral campaign in Toronto, the issue of homelessness was addressed in the particular case of a 40 bed homeless shelter being built at a cost of $11.5 million, an outrageous $287,500 per bed. The original estimate for the entire project was $5.5 million. As a reference point, the average price for a condominium apartment in Toronto is $279,000.[1]
The $287,500 per bed is the net price tag paid to the contractor only. We should not forget that any act of government carries with itself a huge handling cost. This includes the tax dollars that need to be collected, the civil servants and politicians that need to be paid, and the huge infrastructure of government that needs to be maintained BEFORE the money is disbursed. In most governments this amounts to several dollars of government overhead for every dollar spent, which implies that the real cost of each bed is in fact a multiple of the above mentioned figure. Once the facility is finished, we need to add the cost of running the entire project with generously paid civil servants.
The unseen costs of this, and any government expenditure, are the consequences incurred by the taxpayer. Let us not forget that every dollar consumed by government is a dollar not consumed, saved, nor invested by private citizens. Every –unproductive- government job is a productive job lost in the general economy.
In regards to the cost of this new shelter, Phil Brown, the General Manager of the Shelter, Support and Housing Administration for the city of Toronto said: "Is it worth $11.5 million to be able to serve the downtown homeless folks who are some of the most vulnerable in the city? I’d say yes."
As irrational as Mr. Brown’s declaration may seem, we must remember what the incentives a person in his position would have. To begin with, he is spending someone else’s money. Then, he runs the department in charge of the shelter, so the cost overrun is an embarrassment exposing his own ineptitude. We should also point out that increase in funding and responsibilities for his office increases his job security and power. Additionally, in the future, whenever the humanitarian issue of homelessness is raised, especially when something bad happens to a homeless person, he will look like a hero who fights for the rights of the “most vulnerable”. On the flip side, if he opposed the project due to its cost, and anything bad happed, he would be the bad guy of the story, having to defend himself while not saving a penny for himself or advancing his best interests.
Lastly, all types of welfare are open ended expenses, meaning, there is no end to how much money we can spend in better shelters, more nutritious meals, more counselling etc…this is the danger of unrestrained government, they use other people’s money for open ended expenses, so there is no rationing mechanism.
For 2007 the cost for each and every homeless person in Canada, not including government overhead, was conservatively estimated to be between $20,000 and $40,000 per annum and rising[2], while the number of homeless persons keeps increasing. For example, in Toronto, the number of homeless persons rose by 21% from 1990 and 2003.[3]  The explanation for this phenomenon is very simple: when the price of a good or service is lowered, its demand will increase. In other words, homeless help is actually a homeless subsidy, we are encouraging homelessness, and the demand for free accommodation and meals is virtually endless. We will have as many homeless as our politicians and civil servants want to pay for.
Rod Rojas
This work is licensed under the Creative Commons Attribution 3.0 Unported License. To view a copy of this license, visit http://creativecommons.org/licenses/by/3.0/ or send a letter to Creative Commons, 171 Second Street, Suite 300, San Francisco, California, 94105, USA.

Permission to reprint in whole or in part is gladly granted, provided full credit is given.
This article originally appeared in the Libertarian Bulletin Vol. 31 No. 2 Winter 2010, the Newsletter of the Ontario Libertarian Party.