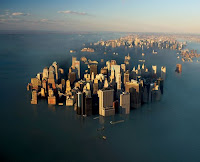 Don't let the picture scare you, a row boat in your garage is not yet a necessity. The ice caps are not melting that fast, not according to this posting, in fact, Arctic ice seems to be increasing. That may just be a short term blip, but in the UK, the Meteorological Office (Met) seems to have blown its own early guess (and I mean guess) as to the severity of this winter.
Around 4 inches of snow (9 cm at Heathrow, 11 cm at Gatwick) has crippled pre-Christmas air travel in the busiest hub on earth and across much of Europe. In Canada or the northern US states that amount of snow would cause a few delays. Maybe the Europeans have taken to heart the warming-alarmist view that winters will just get milder from here on. At the same time, some in Britain think that global warming has stopped.
Peter Foster of the Financial Post discusses the Met's blown prediction and the general issue of AGW in an almost humorous article this week that includes this paragraph:


"No doubt the warmist crowd will be quick to express outrage at this blatant confusion of global climate with local weather, but that won’t wash. The Met makes its short-term forecasts on the basis of the same brand of massive computer power and Rube Goldberg modelling used to project the global climate. The suggestion that forecasting the climate is easier than forecasting the weather comes into the same category as acknowledging that governments couldn’t run a lemonade stand, but then believing that they can “manage” an economy."

The Cancun Climate Conference, which ended a couple of weeks ago, was almost a total disaster for the warmists, but the Mexican government did not want Cancun to be remembered as the end of the struggle. Some last minute back-room arm twisting, and an attitude of agreeing to disagree, ended the conference with an agreement to "kick-the-Kyoto-can-down-the-road" until next year in Durban South Africa. No binding GHG reduction targets were set beyond the already surpassed Kyoto targets for 2012. The Kyoto Protocol is still alive (but zombie-like) until next year. An agreement to set up a $100 billion/year bullshit fund by 2020, with few actual details of how to collect the money was also reached. I have a feeling that economic priorities will neuter that deal and any others.
In Europe and around the world the rules of economics have made the huge government subsidies of the so-called renewables industry unsustainable.
The Spanish have cut support for wind projects by 35% and solar payouts by 45%, and Spain is still on the verge of needing a bailout (from whom?). In France and Germany solar projects have been severely cut back. In Australia, solar-power producers had their payouts cut by 66%. In the UK a backlash against rising power rates has forced cuts to wind projects causing the Danish Vesta company to close five factories in Denmark and Sweden and layoff one-seventh of its global workforce. The green collapse is spreading to the United States and it won't be long before the greenest of all the provinces in Canada, Ontario, follows suit.
In a series of scathing columns, Lawrence Solomon of the Financial Post outlines how Ontario will need to "renege on the egregious green contracts" that were put in place by the irresponsible McGuinty Liberals. Solomon suggests that is the only way for the province to escape bankruptcy in the near future. According to Solomon, the power future for Ontario, for Canada, and the world is still fossil fuel for now.