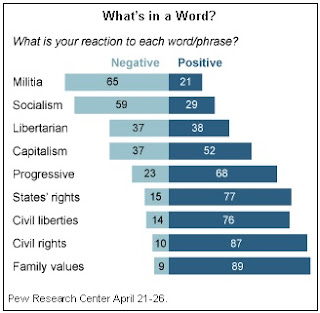 A recent survey of Americans by the Pew Research Center shows that Libertarians have some work to do in defining what they represent.
The chart shows that among those surveyed the reaction to the word Libertarian is not screamingly positive, on the contrary. Yet the terms "States' rights", "Civil liberties" and "Civil rights" have distinctly positive reactions. All of these might be supported to a large degree in the libertarian idea. The disconnect between these terms and the term libertarian seems larger than is warranted, so maybe those ideas are not part of the libertarian sales pitch. They should be.
The article points out that Republicans take a dim view of libertarians, (so much for the term "right-wing" when applied to libertarians) while Democrats are evenly divided and Independents have a much more favourable view (44% positive/32% negative). The term "right-wing" which I just mentioned, would to me, more closely fit "fascist-authoritarian-socialists" who are Republicans, by and large (of course they would disagree).
Libertarians are in desperate need of better marketing strategies or they will be stuck with this negative view.
Posted by Allen Small at 6:07 PM