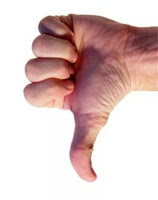 When political parties give up their principles, bad things happen. Of course once in power, the operating principle of almost any political party becomes hold onto power - damn the principles.
In Canada if you belong to the Conservative Party then you know the truth of that last statement.
This morning in the Globe and Mail, Tom Flanagan points to just three issues (I think there are so many, many more) that have created unnecessary debate and discussion, all of them related to the Conservative government's increases in the size and responsibility of the state.
Issue one: the Jaffer-Guergis affair involving alleged lobbying of the federal state to garner subsidies for "green" businesses. Flanagan dismisses the affair then asks the right question: why has a conservative government created a $1-billion Green Infrastructure Fund? Why indeed? Here is a giant plum ripe for the picking by lobbyists and insiders who would scam their own family for financial gain. How is creating this fund being fiscally responsible or conservative?
Issue two: Abortion in the Third World.
First let me say this to those who think abortion should be banned in Canada or anywhere. The only banning that should go on is your power to force anyone to do anything against their will as long as no one's rights are abrogated. If you think a fetus has rights over and above the mother that is carrying it, then you need to take that fetus and bring it to term yourself, good luck. Or should we lock up that pregnant female and force her to carry the fetus? Would you do that to your daughter? The current law in Canada on abortion is the one that is appropriate, that is, no law.
Now that you know my position lets see what Mr. Flanagan said. The Conservative government refuses to fund abortion in the health care part of Canada's foreign aid package. This angers many at home and abroad (including Hilary Clinton) and threatens to become an issue in the G8/G20 summits coming to disrupt your summer plans in Southern Ontario this June. Again Flanagan asks the right question: why is the Conservative government promoting government-to-government foreign aid? He points to scholars that have shown that government-to-government foreign aid (except for immediate disaster relief) actually impedes economic growth and good governance in the Third World. I hope Stephen Lewis reads Flanagan's article.
Issue three: Gay Pride. The Conservatives have decided not to fund this year's Gay Pride Parade in Toronto while continuing to fund a variety of other parades and festivals across the country. Is Harper pandering to the homophobic part of the Conservative Caucus? Probably, but again Tom Flanagan asks the right question: why should the federal state subsidize any parades or festivals anywhere? How is that being fiscally responsible? Well, it isn't and it's too bad that Flanagan stops at three, but it is a start and I recommend the article to you. Flanagan ends by suggesting that today's economic realities will of necessity shrink the size and scope of government, I can't wait.
Posted by Allen Small at 12:55 PM