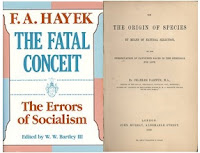 A new website has got me thinking again, about why I do this blog, and why I believe, two apparently very different topics, are so intertwined. The idea that links politics and religion together for me, is called "spontaneous order." One of my fellow bloggers is far more learned than I on the topic, you can find him at Interdisciplinary World down there to the right on my blog list. I've written about this before, and you will see why it comes up again.
Spontaneous order is essentially order that seems to arise out of chaos. Why? Because there are unseen "rules or laws" that create the order. The rules were not made up by anyone, they are just characteristics of the nature of matter and energy, the way the universe works. Humans have discovered a lot of these rules with a tool called science. There are many subdivisions of science now, and we know a lot of the rules.
One of the book covers seen above, is Darwin's Origin of Species. Its in this book that he outlines what he thinks are the rules that govern speciation in nature which he calls natural selection. Natural selection is part of the mechanism of Evolution. Of course Evolution conflicts with a great many religious beliefs which brings me back to the first paragraph, and part of the reason for this blog. Generally I tolerate religious belief because it can be compartmentalized sufficiently so as to not interfere with other people's actions. When it starts to interfere, becoming "pushy" and smothering, I push back. One of the positive results of the new world of "political correctness" that we now inhabit, is that people realize that their particular religion is not necessarily everyone's. So my own children did not sing "yes Jesus loves me" in "public" school, like I once did. Chalk one up for freedom from religion.
Darwin did not know about the genetic reasons for evolution, he did not know about shifting allele frequencies or anything at that level of complexity or below, so he really did not discover the "rules," he inferred the rules. We are still discovering all the rules in biology. The important thing for me, is that the rules are discoverable, not mystical, not under the control of a deity. No deity is required, evolution is spontaneous and orderly.
The other book cover, Hayek's book, is related. If you look up spontaneous order, you will see written that many classical liberals (that's politics folks), like Hayek, believe that markets are governed most efficiently without being governed. The rules that govern markets and human behaviour - the science of economics - work best spontaneously without the tinkering of an intelligent designer.
In evolution, the idea of an intelligent designer is common among religious folk, the undiscoverable, unseen, and unknowable deity, is the designer. In economics, because it is a science peculiar to humans (and no other creatures on Earth), many believe there needs to be a designer, a tinkerer, someone to make it more efficient, because people are smart. Right? Unfortunately this is where the conflict occurs. Economics cannot be compartmentalized, in fact it pervades every aspect of one's life in a civil society. Instead of being left to a deity, economics has become by default the purview of government. My children are not free to interact with others in a spontaneous economic order as they should, they, and all of us are manipulated. We all sing to the tune "the government is here for the common good." The disagreement is whose common good? That is what Hayek's Fatal Conceit is about, people who think they know better.
The video below comes from a new website: Libertarianism. It references spontaneous order, and its delivered by an excellent writer David Boaz. If you need a refresher or a new insight, watch.