Capitalism is required to pay for a communist government 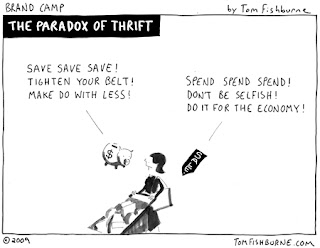 "All governments are communist....... What I mean is that all governments expect to be recompensed, not according to the value of their contributions to society, but according to their needs." That's George Jonas in an op-ed piece in today's National Post called The McGuinty paradox. Mr. Jonas goes on to explain: "Wealth that hasn't been created cannot be redistributed, no matter how much a government needs it."

Of course like all Western governments, in order to stay in power for as long as possible, they buy your votes, they spend "future wealth," wealth that has yet to be created. They assume, things will go merrily on as before, and their over spending will somehow have no effect on the wealth creators.

As Mr. Jonas points out, the McGuinty Liberals in Ontario are a quarter-trillion dollars in the hole. How can that continue without consequences? Will they be held to account? Most importantly, how did we let that happen and can we prevent it from happening again?
Mr. Jonas doesn't say it, but the implication is there, its time to change the way we do government. Government should be there to protect citizens, not to protect the jobs of politicians.
Posted by Allen Small at 11:08 AM