The truth about AGW is becoming CLOUDy 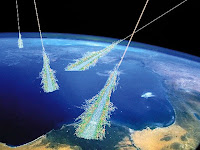 Its funny how quickly science can change.
Here I am in the midst of a disagreement on Anthropogenic Global Warming (AGW) and a Facebook friend (H/T Redmond) tags me on the very same issue with a story that might shut the AGW alarmists down.
This story is just hot off the press, literally, and appears in Nature today, and I can't say that I fully understand its implications just yet. But what I do understand is that cosmic radiation has an effect on climate change through cloud formation....I think. As someone cleverly retorted on Facebook, he can just hear Al Gore saying "bullshit."
But the most interesting part of the story is that CERN scientists have been told earlier to stay mum on the results, likely because it goes against the current AGW orthodoxy.
Of course that is not preventing other AGW skeptics from weighing in here, and here.
This kind of story could have huge political implications, not the least being in the Ontario election campaign now underway. Imagine all the effort spent on reducing CO2 and then discovering that it has a minor role at best on global warming. Embarrassing? You bet.
Posted by Allen Small at 3:42 PM