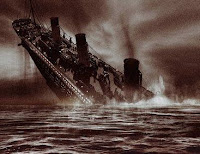 Today stock markets around the world resembled that ship over there, and that was after last week, a bad week. Standard and Poor's downgraded US credit on Friday after the markets closed, and all weekend media types were waiting for the other shoe to drop. Well, it's dropping, but maybe not yet completely dropped.
The media are portraying this as a debt crisis, POTUS Obama calls it a crisis in political will. No matter, things won't start improving until and unless everyone agrees that this is actually a spending crisis. It didn't start with Obama, or Bush 2, the problem  is chronic and widespread across the planet at all levels of government. Spending at a greater rate than income creates debt, its very simple, any household is aware of this reality. Why governments have the right to spend more than they have, is a great question, maybe for another time.
Canada lost its Aaa rating in 1992, and it was not reinstated until years later, after the Chretien-Martin Liberals actually downsized the Canadian Federal government. This downsize, that began about 15 years ago, is the reason most commentators say that Canada is doing so much better than the US and the other G7 economies at the moment.
So the reality is that a country functions better when it's spending is under control, and when its government shrinks giving the population more of its own discretionary income. Job creation is better, the monetary system is better and the future is brighter. That is the reality.
Posted by Allen Small at 3:57 PM