The West coast of Canada like the East coast, is dotted with fishing outports that provide Canadian and world markets with seafood. Despite strict government regulation and oversight by the Department of Fisheries and Oceans (DFO) Canada, the entire Northern Cod fishing industry collapsed in 1992, creating unemployment and more economic hardship in the Canadian Maritimes (see graph). 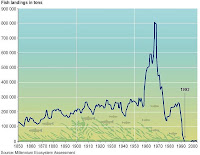 The collapse of an entire population because of overfishing or overhunting is not new or unusual. The Plains First Nations culture that depended on the North American Bison was destroyed when overhunting decimated Bison populations in the mid-to-late 1800's. Many readers might think that this collapse was because of lack of regulation by government in the territories where the bison herds roamed. But you should ask yourself what might have happened if those bison herds were owned by ranchers? The bison story is more complex than that; as one libertarian blogger suggests in this, his first "Avatar post". Today, surviving bison herds are protected or managed and cultivated in farms.  My point is, that a food source fit for human consumption is often best managed if it was cultivated, and owned by a farmer.
Fish farming, the most common form of aquaculture, eliminates many of the risks posed by commercial fishing, namely overfishing, as in the cod example above, the risks to the fishermen themselves, and catching and killing the wrong fish, called by-catch. You would think environmentalists like David Suzuki would support fish farming, and you would be wrong. Over the years through petitions and other forms of activism the Suzuki Foundation has attempted to undermine this industry on the basis of flawed scientific evidence and fraud.
An excellent article in the Financial Post by Vivian Krause called Suzuki's fish story, is an attempt to set the record straight. The article points out that a scientific study in a prestigious journal in 2004 triggered a world-wide scare about toxic (cancer-causing) contaminants (PCBs) in farmed salmon. The study suggested that farmed Atlantic salmon had almost 8 times more PCB's than did wild Pacific salmon, the difference was between 0.0366 ppm and 0.0048 ppm. While that is an 8 times difference, the acceptable range is around 2 ppm, or 55 times more, well within acceptable limits for consumption. When the American Association for the Advancement of Science (AAAS) reported to the media that farmed salmon was 8 times more toxic than wild salmon and a co-author of the "study told the media that 'women should avoid eating farmed salmon at all, from the day they are born through menopause,' and that 'one should avoid farmed salmon like the plague. Our results indicate elevated cancer risk from one meal (of farmed salmon) or even less per month'." Well, that was a bad day for farmed salmon.
It turns out that the fears were all groundless and misleading, but much worse the entire story which involves influential people within the AAAS and the prestigious journal Science and their use of those outlets "to sway market share towards wild fish and away from the competition: imported, farmed fish." Millions of dollars were involved and the Suzuki Foundation is at the centre helping promulgate the lie and receiving funds while doing it. (read Ms. Krause' article)
Ms. Krause points out that this misinformation put out by the Suzuki Foundation may be negatively impacting newborns of "educated" mothers in the Vancouver area, who are not giving their fetuses sufficient omega-3 fatty acids because "Canada's most trusted environmentalist has been giving pregnant women faulty advice to avoid farmed salmon."
Maybe Suzuki is getting the message, "....the Packard foundation paid the David Suzuki Foundation US$762,600 for Pacific Salmon Forests, a project that produced a brochure titled, Why You Shouldn't Eat Farmed Salmon." I did an online search for this brochure which I located in several libraries on the BC coast and this is what came up: "Not Found" (see below) 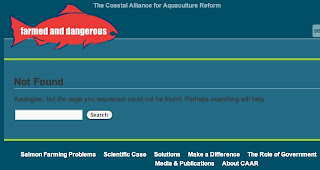 Again, if you are at all interested in David Suzuki and his work, you owe it to yourself to read Ms. Krause' article. Suzuki can and has made mistakes, are there others? I think so, just before I close let me point you to an interesting event that happened last fall in BC.
Much credence was given to Suzuki's war on farmed salmon because wild salmon harvests were falling along the West coast each year. Somehow this was blamed on farming (although I would have thought that to be counterintuitive), disease caused by farming, and global warming. Low and behold huge numbers of salmon returned in 2010. Why? That is not yet understood, but it's interesting.
For those interested in fish farming, here is a quick look.