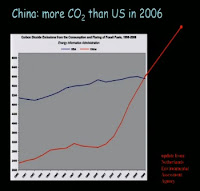 Anyone who has read this blog knows that I am a global warming skeptic. Not so much that I don't believe warming is happening, I just don't believe efforts in Canada, the United States or Europe will make any difference to mitigating warming (and why would we want too?). I don't believe that forcing people to alter their lifestyles by having them pay huge price penalties for carbon dioxide production is moral, regardless of the supposed noble cause (saving the planet!?). I also don't believe that the models presented by the United Nations or any other group could possibly be accurate (given what we don't know) or that there is any risk in just doing nothing (my preference).
Lately I have been involved in researching electric power generation because of its implications for the next election in Ontario. Our current provincial government has already set Ontario on a course that is supposed to reduce our "carbon footprint" but at great expense to  the population, and to Ontario's competitive position among its neighbours. Two-thirds of Ontario's future electricity production is forecast to be nuclear or non-conventional (wind, solar).
Well, nuclear power has been in the news of late, and I will have much more to say about it soon, but I found it refreshing to watch the video below from a global warming believer who is actually trying to get the science right. Richard A. Muller, a retired physics teacher from UC.Berkeley speaks about:

> why our efforts to reduce our CO2 emissions may be futile because of developing nations
> the exaggerated rhetoric used by the IPCC and other warmists
> the exaggerated data about ice cap melting, glacier melting, sea level rising, hurricanes etc.
> the "Climategate" scandal and the facts about the fraud committed by scientists

Prof. Muller injects a degree of uncertainty about the warmists' data that has been sadly lacking. He admits that there is uncertainty, unlike the Gores and Suzukis of the world that claim the science is settled. I disagree with Prof. Muller on the moral issue of coercing joint global effort to reduce warming, and I also disagree with him on China. He assumes that China will continue to grow into the future as it has in the past 20 years (10% per year). I find that difficult to believe as I've indicated before. A recent article in Canadian Business Magazine titled China's Coming Collapse (by Jason Kirby) details why China's apparent success may be just a mirage, much the same as the Japanese bubble of the 1980's that resulted in Japan's lost decade. Mr. Kirby can be heard on a podcast discussing this article if you prefer.
So here is Richard A. Muller, from UC.Berkeley speaking about Global Warming -- The Current Status: The Science, the Scandal etc: