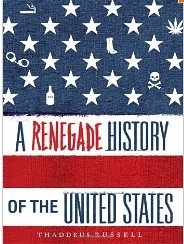 One reason people find history so boring and difficult to relate to, is that those people, who are portrayed in history books, were the movers and shakers of the world in their time. They were the leaders, the monarchs and nobles, the presidents and prime ministers, the explorers and discoverers, and the dates of their achievements were recorded and transmitted for posterity.
But what was everyone else doing? You know, the common folk. Did they not play a role in shaping their present and their future. Of course they did, but few of them were taking notes, so much of that history - interesting history - is lost.
In the following ReasonTV video clip, author Thaddeus Russell attempts to recover some of that lost history. His new book A Renegade History of the United States could be very interesting. As he says, these people did not write pamphlets or manifestos, they were not explicitly political, they were just living and often "doing things they were not supposed to be doing." In doing that, they have left us all a legacy of freedom, far greater in many cases, than was achieved by the leaders. Of course by extrapolation similar stories were not written every where else.