Canadian Federal Election? Would anything change? 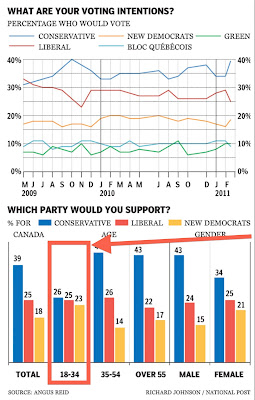 A Valentine's Day poll produced by Angus Reid and presented in the National Post today, shows the country is falling back in love with Stephen Harper and the Conservatives.
The recent noise coming out of Ottawa that a spring election was imminent, may have been squelched by the ad hominem attacks on Michael Ignatieff. Maybe the ads worked, maybe not.
I've been looking at "Education" with a jaundiced-eye in the last few days and I was intrigued by the poll graphic at left. Take a look at the bottom part: Which party would you support?
It has always been my contention that there really is no difference between the major parties in Canada (or the United States). Of course the main-stream media would never admit this because then they would have very little news to discuss on a daily basis, and polls like this one would be meaningless. Canadian main-stream media like to portray the Harper Conservatives as right wing, the Liberals as centrist, and the NDP as leftists. I think they ALL advocate statism: the principle or policy of concentrating extensive economic, political, and related controls in the state at the cost of individual liberty. All the parties shown in this graphic would use the coercive power of the state to effect their particular pet policies. But I've digressed, back to the bottom of the graphic: Which party would you support?
The 18 to 34 age bracket, those that have most recently come out of schools, and so presumably are still most influenced by what they learned, they would vote quite differently than the rest of the population. This group is fairly evenly split between the three major parties, why is that? Does this mean that this group sees little difference between the parties? Does this mean that this group is not influenced by the mainstream media's portrayal of the three parties? Both of those questions may be true, but also worth noting is that the total shown for this age bracket is only 74%, so 26% of this demographic (a fairly significant chunk) would choose some of the minor parties or no one. Of course this age group (18-34) is the most apathetic in terms of voting. Apathy could mean disinterest, or it could mean resignation, as in it doesn't make a difference. Maybe they know something?
Posted by Allen Small at 12:44 PM