Why you need to be a climate change skeptic.


“In climate research and modelling, we should recognize that we are dealing with a coupled non-linear chaotic system, and therefore that long-term prediction of future climate states is not possible.”

Yes, that is a real quote from an IPCC report in 2001, and it tells me that long term predictions made by modelling is impossible. If that doesn’t make you instantly skeptical about all the predictions you have heard about climate change, I don’t know what will. So, at the risk of being guilty of piling on, I’m going to try and add to your skepticism using real data, not predictions.

First it’s important to understand that skepticism or uncertainty should be the normal or default position in any science related endeavour. At the very least everyone should reserve some doubt about every issue with regard to science. However, for climate change it is as if we have been given just a binary choice, either one believes that humans are the primary cause of climate change (Anthropogenic Global Warming), or one is a science denier. It’s a false choice and one that no one should be forced to make because there are many degrees of choice. But that is irrelevant today.

In today’s world anyone voicing doubts around the causes of climate change, will invariably be called names, denigrated and worse. The pervasiveness of climate alarmism in our society has made expressions of doubt politically incorrect. Its even worse within the science community. Any doubts raised by those with academic credentials threatens their grant money and worse their livelihood. Intimidation is the watchword in so-called climate science.

Any suggestions that climate change may have a positive or neutral side, are met with derision. It’s all negative. Climate change alarmists are determined to keep global temperature from rising even one half of a degree at any cost, ignoring the fact that the last 1 degree of increase has coincided with the largest rise in human welfare in history. Is that a coincidence? I think not. What about the so-called “greening” effect on the planet? The point is that changes to climate invariably manifest themselves locally and may be beneficial in many instances and detrimental in others. There is no such thing as an optimal climate for Earth as a whole. Earth has been warmer and colder, wetter and drier over its history, and most of the reasons are beyond human control. More on that later.

The purpose of calling skeptics stupid and deniers is to discourage questions and debate, especially among the young regarding the costs versus benefits of mitigation. Not asking questions breeds stupidity. Journalists have been the major contributors to this breeding of stupidity because they not only won't ask questions, they go out of their way to stifle the speech of those that do.

What’s wrong with the alarmist view is not that the climate is changing or even that humans may have some influence, but the idea that the situation is so dire, that major government policy changes must occur world-wide to mitigate those changes before its too late. At best thats an exaggeration, at worst its just a lie. The bad news is that in the results of the recent Federal election, Canadians demonstrated that they accept the lie, and are willing to accept policy changes that will raise the price of energy even though there is little evidence it will have any impact on climate change.


Even the Paris Climate Accord signed in 2016, and which the Americans have dropped out of, allows several of the signatories to continue to increase their CO2 emissions for another decade. Canada’s efforts to reduce emissions during this time will have virtually no effect on global emissions. Take a look at this graph.

It was created by an American climate scientist (John Christy) to show what would happen to IPCC models if the USA (which now produces 13.77% of global CO2) disappeared in 2012. Now imagine if it were Canada with our paltry 1.66% contribution of CO2.

This is why its important to consider the veracity of the climate information you are being fed. Much of that information is in the form of misleading graphs. Look at this graph that shows the logarithmic increase in atmospheric CO2 over time.

Its much less dramatic when shown like this.
It's the same graph, but the vertical or Y axis has been extended.


Similarly this graph of temperature is commonly shown by the climate alarmists to prove the rapid increase in temperature and indicate how dire the situation is.

However, change the vertical axis and voila, the rise in temperature is not scary at all. Imagine if this last graph was shown on newspaper front pages tomorrow. I suspect climate alarmism would collapse.

A question that is never asked is how will we know if our efforts to mitigate climate change are working? The short answer is, we probably won’t. Efforts to reduce CO2 emissions have been underway for years in Europe and North America. Have they had an impact? You would be hard pressed to find where that has happened. If CO2 is the cause of global warming and the supposed weather anomalies that are occurring, will we ever see if our efforts are impacting the problem?

One of the most important components of the scientific method is the idea that any hypothesis can be proven wrong either by observation or experimentation. If a hypothesis can’t be proven wrong, then its not science. This is called FALSIFIABILITY. The problem with climate change is that its effects are always so far in the future that most people won’t be around to verify the hypothesis and justify any extraordinary efforts made today. Much of the anxiety around climate change is based on computer models that we must accept on faith that predict dire consequences. One way to test the falsifiability of the hypothesis that CO2 causes climate change is to compare the predictions made thus far by the models to real observations.  Over the past 40 years the graph shows that the models predict hotter temperatures than the actual observed data. This is more reason to be skeptical about the hypothesis.

However, these days every extreme weather event is seemingly related to climate change. Whether its too hot or too cold, too wet or too dry, too stormy or too calm, all of these random events once attributed to ordinary weather variability, are now linked to climate change. Is it true? The Americans have easy access to this sort of data. This graph shows floods (blue) droughts  (red) in the US since 1895. Do you see significant pattern or trend? I don't.


This graph shows global droughts over a 30 year period. Again no pattern or trend, maybe even a decrease. 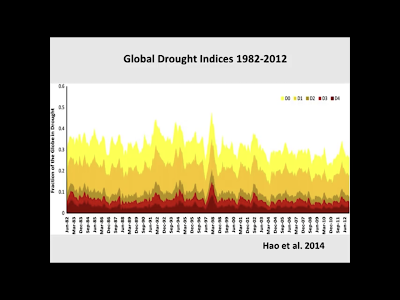 This graph shows the number 100 degree Fahrenheit plus days, no pattern. In fact it was much hotter in the 1930's and 40's. 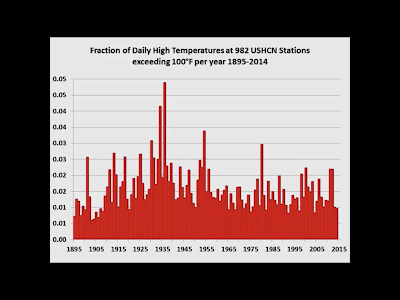 What about storms? Is it getting more stormy?
Here is a graph of tornadoes in the US. Its pretty clear that the most recent data shows fewer tornadoes, and certainly no pattern. 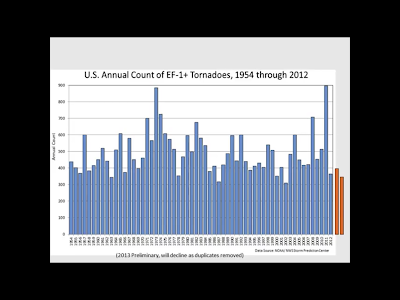 How about hurricanes globally? 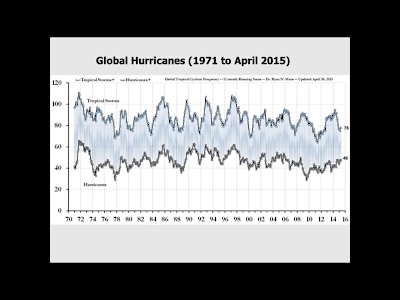 Again no pattern and maybe even a slight decrease.

Of interest to Canadians is the extent of snow and ice in the Northern Hemisphere. 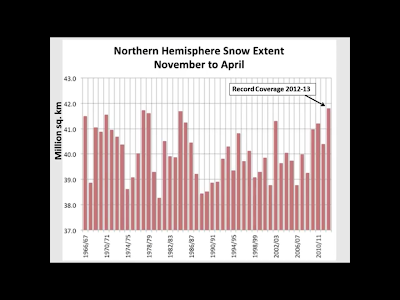 Again no pattern for snow cover in recent years, and we certainly aren’t getting less cover.

But this graph of ice at the poles shows a definite pattern. 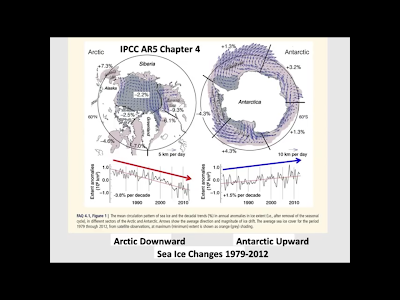 Less Arctic ice, more Antarctic ice. Why is that? Who knows? Does it indicate that there is a problem? That depends, but it does show that there has been warming - but of course thats been going on since the ice sheets retreated over the northern hemisphere at the end of the last ice age. Maybe this is just a continuation? It does not explain why the Antarctic ice sheet is growing. On the whole the amount of global ice pack is fairly stable as you can see in this final graph. 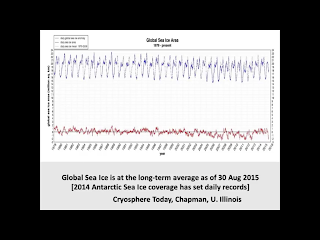 I hope you can see what I've been driving at during this lengthy tirade. I'm NOT denying climate change, I know something is happening as I knew when I was growing up (see map inset) in the 1950's and 60's on the shoreline of the Glacial Lake Iroquois. Go there and you will find a steep hill towards the South that made bike rides to downtown Toronto very quick as it was all downhill for me. I lived just off a streetcar line and I enjoyed watching the streetcars going north trying to ascend that hill during icy conditions. 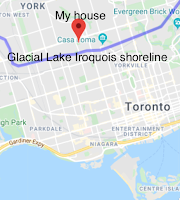 Ah memories, anyway, my point is that there is a great deal of uncertainty which leads me, and maybe you too, to skeptisism around this whole issue of climate change. To extract taxes and base large expenditures of tax money on government policies that are just speculations with no hope of ever seeing benefit is criminal.

Aside from greenhouse gases like CO2, there are many other well known reasons for climate change. All of those various ice ages had a cause and the cause was related to various astronomical situations like the Earth's orbit, its axial tilt, and its wobble. These are explained very well in this video.

The creator of the video goes on to explain his position on climate change in a subsequent video. Lets just say he is not an AGW skeptic, but the video above is very well done.

I'm going to give the last word to a local climate scientist. I don't think he is a skeptic, but his answers are honest and get to the heart of my tirade. Is this issue of climate change something we need to worry about or should we confine our worries to global pandemics like the Wuhan Virus or SARS or real issues like pollution and habitat destruction and poverty, disease, war, and so on? You decide. 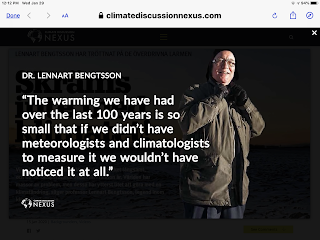 P.S. For the skeptics, you might enjoy this little piece of fluff....

P.P.S I worry about what our children and grandchildren are being taught. Greta here, for example.... 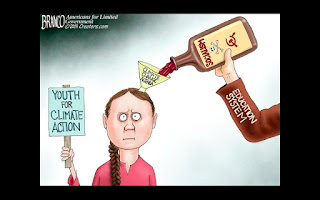 Wrong Predictions on the environment....
https://www.aei.org/carpe-diem/18-spectacularly-wrong-apocalyptic-predictions-made-around-the-time-of-the-first-earth-day-in-1970-expect-more-this-year-3/