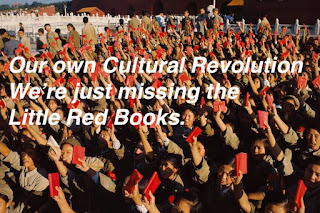 Every Canadian who knows a bit of history has heard of “The Quiet Revolution.” I was a teenager during much of that time (the ‘60s) and like most people I was oblivious and unaware that it was happening.

FYI according to Wikipedia: “The Quiet Revolution was a period of intense socio-political and socio-cultural change in the Canadian province of Québec, characterized by the effective secularization of government, the creation of a state-run welfare state, and realignment of politics into federalist and sovereigntist (or separatist) factions and the eventual election of a pro-sovereignty provincial government in the 1976 election.” It was a cultural revolution in Quebec. We continue to be impacted by it. The recent Federal Election displayed for all to see just how different Quebec is from the rest of Canada.  Quebec’s Bill 21 about wearing religious symbols while holding a government job, speaks to how secular and maybe intolerant the Province of Quebec has become. The Bloc Québécois, a Federal separatist party, won almost half the electoral districts in Quebec in the 2019 election. The Quiet Revolution has dramatically altered Quebec and its relationship within Canada.

But today, we are in the midst of a much larger global, leftist, cultural, quiet revolution that is dramatically changing countries across the planet from within, and the way individuals interact with each other and their governments. It’s ongoing, so the results are not yet determined, but many changes are already apparent.

I am certain that I’m not the first to suggest this world-wide, politically left leaning, cultural revolution in the works. I am just as certain that my views of the state of battle, and the winners and losers in this revolution, will differ from the main stream narrative. Let’s see.

Just this past week I came across a new phrase (new to me, anyway) that I think is characteristic of this revolution: “Cancel Culture.” Google it and you will get: “the practice of no longer supporting people, especially celebrities, or products that are regarded as unacceptable or problematic.” I’m sure most people were aware of cancel culture, without ever giving it a specific label. We all saw what happened when the #MeToo/#TimesUp movement began. All sorts of celebrities, mostly men, became socially persona non grata. In many instances this social shunning was well deserved, but it has become more than that, it now involves the policing of thought, the squelching of free speech in support of a new political correctness.

Take the recent case in Toronto Public Library system where a feminist author rented a room in a library to talk about gender identity and its legal implications. This author was called a NAZI by a well known CBC Radio journalist.

Just as an aside, for me “gender identity” is not a subjective choice, on this the science is settled for me. It can be objectively determined, based on chromosome examination, never mind the genitalia, what is the gender of a particular human individual. Its almost funny that the same people that are certain the planet is overheating because they say the science says so, deny the science that says there are two and only two genders. But I digress.

The new cultural revolution has made any discussion or debate about gender, verboten, and politically incorrect. To the credit of the chief librarian of the Toronto Public Library, the gender talk was allowed despite the protestations of the transgender gestapo before and during the talk by the feminist author. Even the Mayor of Toronto, always on the hunt for more votes, came out favouring the cancellation of the talk. Before the revolution this would not have been a story, let alone a media headline. But here we are, the power of identity politics, in this case the LGBT etc.. community, such is the misplaced influence they have.   Imagine if our feminist author tried to speak at a university today. I guarantee it would not happen. The thought police would have cancelled it, and very few people would say boo. It’s now accepted that universities are no longer places where diverse opinions and ideas can be expressed. Free speech is no more, we now expect filtered speech, speech that complies with revolutionary politically correct thought. The academy has been deadened. When I was a student, universities were the places where free thought was nurtured, and expected. Today, if its not politically correct, its cancelled. Such is the new culture. More next time.
Posted by Allen Small at 4:35 PM