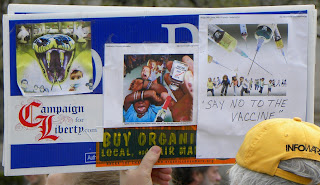 Two rules to contemplate for the new year:

1. Never fool with mother nature, she will win.
2. Frequently conspiracy theories have no merit, you should be skeptical always, especially when there is good evidence that contradicts the theory.

Good advice, I think. Sadly the photo left tells a different story. The photo suggests that someone associated with the liberty movement is against vaccination, all vaccination I guess. This is troubling. Certainly the person in that picture has a right to voice an opinion, right or wrong. But blanket generalizations like that do not put libertarians in a good light. The man holding the sign is doing a disservice to the cause of liberty and perpetuating a myth. And both are dangerous. "Say no to vaccine" flies in the face of over 200 years of evidence, it's a stupid, stupid statement. I'm not about to defend the practice of vaccination here, if you are interested in finding out some information from someone other than Alex Jones, then go here.

Its easy to dismiss the tremendous evidence that very few people in the Western world get sick or die from the numerous diseases that don't seem to be making people sick or killing them anymore. The diseases are no longer a problem, most people are immune to them because of vaccinations. But the diseases are still out there, people are still infected, the causative microbes still get passed around. Very few people show symptoms because their immune systems are able to fight the microbes off due to previous vaccination That's how we know the vaccines work. What happens if people refuse vaccinations, like my liberty minded friend above?

In recent years vaccinations have become associated with childhood autism, there is no evidence to support this. Young children get numerous vaccines through their early years. Autism is behavioural disorder that doesn't manifest itself until children are 12 months to 4 years old. Parents look for a cause and point to vaccination because autism and vaccinations are correlated. But correlation is not causation, and I repeat there is not supporting evidence. On the contrary, there is much written against. But worried parents have taken the precautionary principle to heart, and refused certain vaccinations. The results are predictable as you can see here, here, and especially here.

Be skeptical, but be smart.