A libertarian diet: How the government makes you fat. 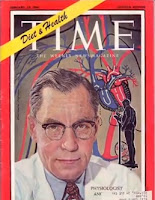 About 2 years ago, I discovered that I required hernia surgery, it's not uncommon at my age. I chose to go to one of the few private hospitals remaining in Canada (near my home). This hospital was a hold over from the time before socialized medicine, a centre of excellence for hernia surgery worldwide. Unfortunately (for me) they refused to do the surgery unless I lost some weight. According to the doctors in the private hospital, weight loss would make the surgery easier and the recovery quicker.

So, I had a dilemma, lose weight, endure the discomfort of the hernia, or go to a government run hospital and get the surgery done. Maybe the queue in the government hospital would be shorter than the time it would take to lose the weight, I needed to lose over 20 pounds. 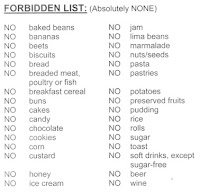 I chose to lose the weight and go to the private hospital, and they were good enough to give me a diet they recommended to lose weight quickly and safely. I've posted a part of this diet here, and you can see from the "forbidden list" that this is a low carb diet. What you can't see on the other side, is that meats, fats, cheese, eggs, nuts and mostly vegetables, make up the greater portion of what I was allowed to eat.

This was definitely not a "fat free" diet, but it was virtually a "no carb diet".

The diet worked marvellously well, I was able to eat more often in some cases, but of smaller amounts of food. I learned to eat less and as I reached the goal set by the doctors, and had my surgery scheduled I was put on a "maintenance diet" that was very similar to the original, I was just allowed to eat a bit more. My weight levelled off as if by magic, I had the surgery and was out in two days. Recovery was pretty quick as predicted.

The best part of the story is most of the weight is still off, and I have good evidence that this diet really works. Emulating it, on a daily basis works to keep my weight down, and it's so simple.

The diet that I was on, is similar to diets advocated by Gary Taubes. The TIME cover (top) and the story that went with it, was one of the major impetuses that led to the "fat-free" craze that still grips our society. Listen to Gary Taubes as he was interviewed by ReasonTV and look at the notes I have appended below for more information, he thinks fat free diets are crazy:


Reason.tv's Zach Weissmueller talked with Taubes about his controversial work in the world of nutrition and epidemiology, including Taubes' hypothesis that carbohydrates, not dietary fat, overeating, or lack of physcial activity, are the primary factor causing obesity. Other topics include the inability of governments and large informational institutions such as the American Heart Association to adapt to new information, the mess of bad legislation and bad science that Taubes believes led to America's obesity problem, and why many libertarians seem to love the Paleo Diet .
Taubes' work has unsurprisingly invited criticism from scientists, government officials and journalists, even in the pages of Reason Magazine, where he went back and forth with Reason contributor Michael Fumento. Read below and decide for yourself who, if anyone, is right:
Fumento on Taubes - http://reason.com/archives/2003/03/01/big-fat-fake
Taubes' response - http://reason.com/archives/2003/03/01/an-exercise-in-vitriol-rather
Fumento's rebuttal - http://reason.com/archives/2003/03/01/gary-taubes-tries-to-overwhelm