Family sinking in debt? We told you so. 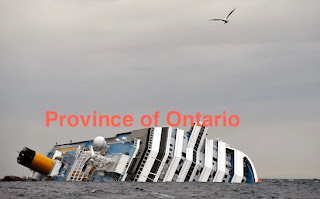 Suppose that nine years ago your family began a spending spree. There was no pressing need to do this, in fact, your family already had significant debt, but interest rates were low and you expected them to remain so. Your income was stable, and you expected it to grow over time, that way your debt would be manageable and your family would enjoy a better lifestyle.

Year after year, family spending increased and debt accumulated, your income was stable but economic conditions actually worsened. Your hopes for increased income did not materialize, but interest rates were even lower now, so debt was still manageable, though rising quickly.

Even with historically low interest rates, payments on the debt were becoming a significant portion of your monthly expenses and that was a worry. Family spending had almost doubled, so had the debt compared to nine years earlier. You needed help, so you hired a financial expert, to point out where cuts in spending could be made.

Sound familiar? Unfortunately that story is not that uncommon among Canadian families, many don't know better, and were/are enticed by the low interest rate environment. But when that story can be superimposed over the government of the Province of Ontario, which has expertise, and smart people who should know better, you begin to wonder.

This week the long awaited Commission on the Reform of Ontario's Public Services, tabled its 540 page report. The very size of the report of course, is directly related to the size of the public service, its big, way too big. The comments in the next day's newspapers about tough medicine, drastic cuts, and grim diagnosis, makes it sound like spending restraint itself is the evil.

No, what is evil is reckless spending, that's what the Liberals in Ontario have been guilty of since coming to power in 2003. They have steered the Province into a rock and the ship of state is sinking in debt, unless spending is curtailed now. Essentially that is the message of Don Drummond who chaired the creation of the aforementioned report.

This issue of reckless spending was not a concern of the major opposition parties or the government during the General Election less than five months ago. Why not? Was it not clear as day that the course set by the government would lead to trouble? Where were the supposed fiscally responsible Conservatives? Did they not see the rocks ahead? Hard to believe.

There was one party that made this issue, the issue of spending and debt, the central theme of its campaign last October, the Ontario Libertarian Party. For example, the video that can be seen here, points directly to the problem and asks the important question: how much better off are citizens today with all the additional spending? Obviously not better off, in fact there is a problem and it's getting worse.

Mr. Drummond's report is barely a first step, but at least it's an acknowledgement of the problem, so that is a positive. The document itself contains 362 recommendations, almost one a day for a year. In the report, Drummond suggests that it needs to be enacted in its entirety, not just selecting some items and leaving others. The Liberals have already pronounced on that, they won't do it.

Drummond's mandate was to find a way to balance the budget. I repeat balance the budget. That does not mean reduce the debt, no sir. That means, just stop making the debt BIGGER. In government jargon that means eliminate the deficit by the 2017-18 year. That also means the debt continues to grow for the next 5 years. Citizens will continue to service the debt, which is now a significant portion of the annual budget, and everyone hopes interest rates stay at historic lows (not likely). The Drummond Report is not the end, it is not even the beginning of the end, of what the Ontario government needs to do (apologies to Churchill) in order to create the conditions for a prosperous future Ontario.