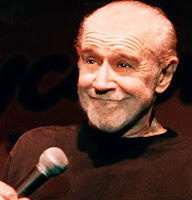 My generation was very fortunate to have George Carlin around to keep us laughing and to keep things in perspective. I'm not certain of Carlin's political views, but I know that there were many things that I could agree with and he certainly had a libertarian attitude. Carlin's views on religion are well known and when I was younger his views were a touchstone for mine before the days of the militant atheists.
Mostly he was important because his humour made us look at the world from his perspective.
People underestimate the power of humour and satire and their role in our society. Just look at how Jon Stewart has changed the way both young and old now view the NEWS.
So here, just for fun, is George Carlin's view on the Planet from almost twenty years ago: Warning: Carlin uses several of those seven words that can never be used on television. Enjoy :-)