Notes from the trenches on morality, a debriefing. 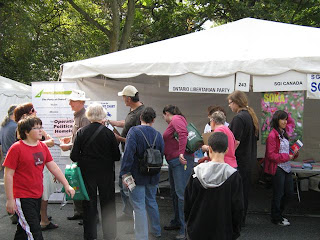 Out of necessity I try to shield myself from bad politics, which is to say any politics that has coercion as its modus operandi. Lately that has meant subscribing to a different newspaper, listening to different radio stations, following libertarian "friends" on FaceBook, generally just not dealing with the real world, I think it brings down my blood pressure. Sure I keep up with the news of the day and sometimes blog about it, but meeting others is restricted to family, friends, and libertarian pub nights (preaching to the converted). I'm in a libertarian cocoon much of the time and its comfortable.
This past Sunday presented a chance to interact with the unwashed masses. The Ontario Libertarian Party with my help, presented Operation Politically Homeless (OPH) at Toronto's Word on the Street book festival. Our primary goal is to uncover latent libertarians and bring them out of the closet by joining our cause. Sunday was a good day for the cause, we spoke to hundreds I'm guessing, and some of those were interested in what we offered.
As far as my blood pressure, lets say there were some moments. One of my favourite rebukes goes like this: I had just finished explaining that eliminating various government programs may reduce taxes and give individuals more spending power. It may also lead to larger charitable donations so that those people who depend on charity will get the help they need. It's a perfectly reasonable argument, but I know people who have their mindset on the state as the source of all good, never buy the argument. Several times during the day I was told: "but many people don't or won't contribute to charity, that's why we need those government assistance programs that alleviate poverty and taxes to pay for them!" If you don't give voluntarily, you will be forced. Coercion is a tough nut to crack.
Earlier in September at one of our pub nights we invited Stefan Molyneux of Freedomain Radio (FDR) fame. We had a great turnout including several that had never been to one of our pub nights. We had asked Stefan to speak about morals and ethics with respect to libertarians (see video below from an older FDR posting about the morality of coercion), which he was happy to do. During his talk he used the example of the paradigm shift in thinking that occurred between the time slaves were freed in one country to the present day when just about everyone views slavery as abhorrent. Certainly that was not the case throughout much of history. Even Thomas Jefferson who penned the Declaration of Independence, owned slaves. It took more than a thousand years from the time of Cyrus the Great of Persia until 1981 when Mauritania finally abolished slavery. Of course most of Europe and the Western World was free of slaves by the end of the 19th century. The brief exception being the slave labour camps of the Nazi's, composed mostly of Jews (including my parents and inlaws) and the Japanese Prison camps of the Second World War. Stefan Molyneux likened this shift from 'slavery is good - to slavery is bad' as the requirement before libertarians will form governments in the West. The idea that people/governments have the right to coerce individuals to pay for goods and services they would not support voluntarily, needs to become as abhorrent as slavery is today. I hope it doesn't take a thousand years, but I fear we are still a long way from it.
During that OPH day, some suggested that we (meaning libertarians) can "ride the wave" of protest that exists particularly in the States, you know the Tea Party protests. Our day has arrived they said, wait until the next election! That was not the impression I got from most of the people I spoke to. On the contrary when I mentioned 'libertarian' to many, they linked us to Tea Party lunatics they had seen or read about in the media. No, the Tea Party is not helping our cause.
Towards the end of the day while speaking to an older woman I asked the question "does government do a good job?" She asked, which government? I said we are a provincial party, but any level of government will do, they're all the same, you choose. She looked at me like I had just stabbed her cat, she was indignant. "No, they NOT all the same" she whined, and stomped off. Yes, they are!
FYI, here is the video where Stefan Molyneux explains why Ron Paul will not achieve power and even if he did why the population is not yet ready for a libertarian type government. It's the slavery paradigm, the shift in thinking must happen first.