I once worked for the largest school board in Canada. Over those many years, I was a part of several curriculum revisions, several attempts to change the way material was presented, other attempts to improve the system, and all sorts of tweaking and adjustments along the way. Always at the back of my mind I wondered why it was, that so late into the 20th Century, the education of our young people had not been perfected. Teachers and administrators were still tinkering with, and trying to perfect our educational model. Huge amounts of money were being spent (much of it misspent in my estimation) and still a significant proportion of our young people fell by the wayside, unable to cope within the system and often left with no other options but to leave. Where else would this type of incompetence be tolerated? Imagine if medicine or industry failed at the same rate as the school systems fails its clients? In Ontario, about 12% of the population do not complete high school, slightly less than the average for Canada. In the United States huge spending increases over the past 40 years do not translate to improvements in Math or Reading scores, according to charts like this one.  One can only conclude that somehow the original model IS the problem. 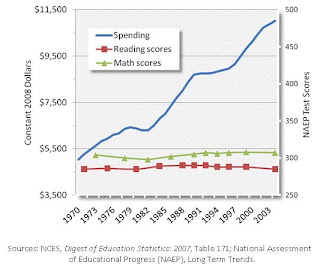 From a libertarian point-of-view the educational model in North America is wrong by its very nature. How can a system that is coercive at all levels, deliver a service that is tailor-made for individual children? Can our educational model produce individuals who are responsible and qualified to care for themselves? Are these individuals able to maximize their potential abilities and achieve their goals? Why do we tolerate a system that can't deliver that type of service? Can we change it?
All these questions need to be addressed, but first, its worth looking at the origins of the system of education that pervades Canada and The United States and proceed from there. The following video clip is also posted here.

Watch more videos like this at www.quantumshift.tv
The School Sucks Project
Posted by Allen Small at 3:59 PM